skip to main | skip to sidebar

.. and two back. Well, I promised monthly updates but not significant progress.

My immediate goals were to assemble the exorcists I've ordered; and to start painting the vehicles and seraphim sorting out the colour scheme.  The tanks have only just arrived and I have just started pinning the metal parts to the plastic parts: 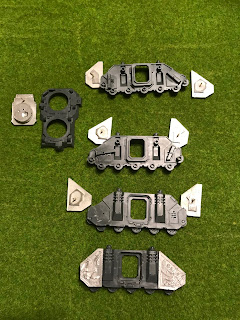 I have decided to assemble one vehicle as the organ pipe exorcist and to leave the other with open front and rear hatches so it can be a Rhino/Immolator/Exorcist as required.

I am painting the vehicles *Navy Blue* and some details in *Grey.  I made a terrible mess with Nuln Oil(Shade) on one vehicle but this should be easily rectified by brushing over with Kantor Blue(Base).

I choose the seraphim to start because of their open pose.  Probably because of their age I managed to break a few of the supports while base coating.  So I have decided to rebase all of the models onto 32mm bases using brass suport rods so expect a post over the next month or so detailing that procedure.

Posted by inquisitor darius at 20:59 No comments: 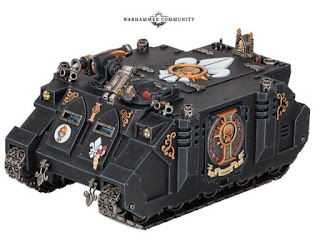 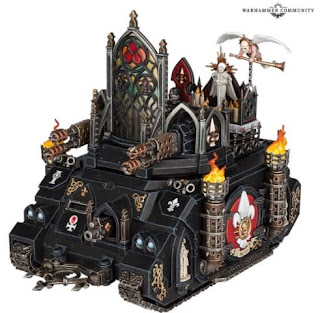 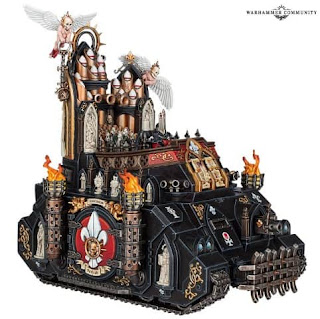 So GW has now previewed the new design of the Immolator and Exorcist.  Notice anything?

The Exorcist driver is missing her head but also both models have a hull heavy bolter.  So my thoughts are will this be optional in the rules or are the old models invalid.  Are the new models so fussy and detailed that you will never see a well painted one on the gaming table.


Alright, I forgot the Repressor previously sold by ForgeWorld, but so has GW. 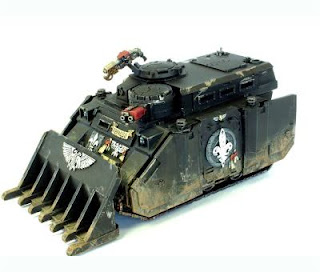 Posted by inquisitor darius at 18:22 No comments: 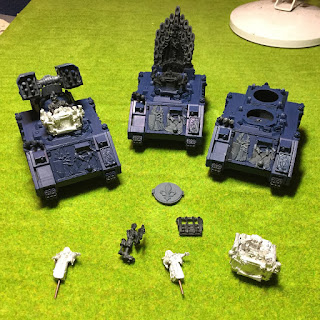 There are currently three vehicles in the sister codex - the Rhino, Immolator and Exorcist.  (The former Witchhunter codex also allowed a Land Raider if an inquisitor was present.)  GW have only shown the new Rhino which appears to be just the Space Marine Rhino with a few decorative bits added.  I am hoping that they retain the top plate in the Immolator kit which I think gives the sisters’ vehicles an iconic look.

I have seven vehicles with the rear hole in the top plate glued shut with the fleur-de-lys hatch and with the front hole is open to accept either a cupola with storm-Bolter (to form a Rhino) or an Immolator gun assembly.  I have one fully assembled “organ pipe” exorcist and two further vehicles (with two more on order) which have the metal side plates but both holes in the top plate left empty so I could kit them out as a Rhino, Immolator or Exorcist.  ForgeWorld used to sell an alternative Exorcist rocket set.  I did buy a knockoff resin kit from ebay but it was utterly underwhelming.  I have got a couple of the old metal Space Marine Whirlwind rocket kits but I currently think that the plastic Whirlwind rocket bits look the best but I look forward to see what GW plans for the exorcist. 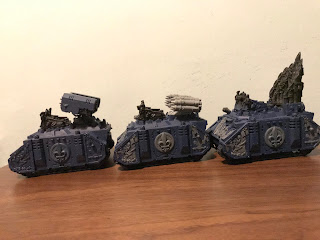 For the whirlwind missile system to fit in the back hole with the organ console in the front hole I had to saw a piece of the console off (the bit which holds the missile rack - see picture below). 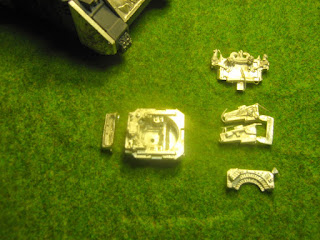 Posted by inquisitor darius at 20:25 No comments: 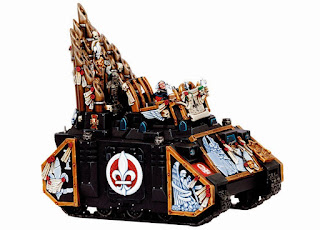 White Dwarf Issue 294 - June 2004 - saw the release of the Sisters' Exorcist tank.  It's design was credited to Tim Adcock, Juan Diaz and Aly Morrison.  In 2004 it cost the princely sum of £30 (compared with the current £36).  It seems to have been the last vehicle released that had both metal and plastic parts.

I currently have one of this wonderfully bonkers model assembled, which weighs in at just over 400g, and this is how I put it together a few years ago: 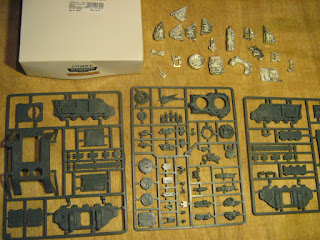 Well, this is what you get with the Sister of Battle - I mean Adepta Sororitas - Exorcist tank:  The two standard Rhino sprues; the Immolator sprue and a number (17) of bits of metal.  What you don't get are instructions. 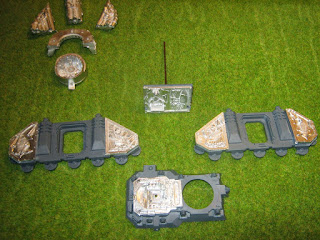 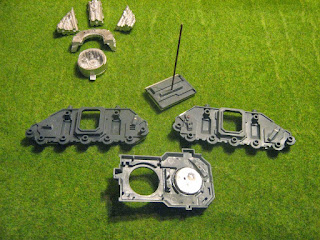 It is tempting to assemble the Sisters' Rhino and then stick the metal parts to the assembled rhino, but resist - pinning the metal parts to the plastic is essential if you want to avoid the tank falling apart.  For this project I used a fairly thick (1.5mm diameter) brass rod for all the pinning.  A couple more tips - when gluing metal parts to plastic it is important is to ensure both parts are as flat as possible - I rubbed the parts against a flat piece of aluminium oxide paper (that is posh sand paper).  I then scored the surfaces to be glued with a knife so the glue can have some 'purchase' as my old man used to say - that is allowing the glue to grip the roughed up surfaces.

The usual problem with pinning is to line up the holes in the two parts, but when fixing metal to plastic it is easy enough to strengthen the plastic part with a bit of sprue and then holding the two parts together, drill through the sprue, the plastic part and to mark the metal part.
Just as the carpenter's adage is "to measure twice and cut once", the modeller's mantra should be "to dry fit ten times and glue once".  By dry fitting I mean making sure that the two pieces to be glued fit together correctly and that the next peice to be joined will fit correctly as well.
Remember that superglue continues to strengthen for a few hours so don't be in a rush - be prepared to do a bit each day so that the sub-assemblies are strong when you handle them.
So, in the above pictures, you can see that I have fixed the side plates onto the track sections; the front plate onto the front and the forward cockpit onto the top section. Now the rhino parts can be assembled as usual - the track sections and then the cabin.  Before fitting the top section the rear cockpit is glued and pinned to the underside of the top section which can then be glued to the top of the rhino.  As the rear cockpit is hanging down on the inside of the vehicle, I reasoned that it could do with some support from beneath; so I glued some 1cm sections of sprue on top of each other to form a wall, which I then sanded down so that it fitted tightly between the bottom of the rear cockpit and the floor of the cabin (see picture below). 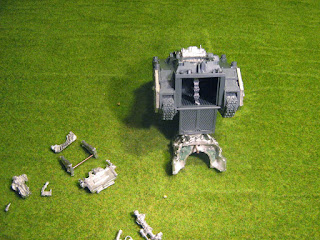 The organ pipes were pinned to the metal base.  As I assembled these I placed a thin roll of green stuff between the pipe sections, principally to hide the gaps but also to stabilise the assembly.  I left the pin holding the centre pipe section about 1cm long so that it would extend down into the plastic body of the tank to secure it when glued together.  There were gaps at the base of the pipes which needed filling with green stuff. 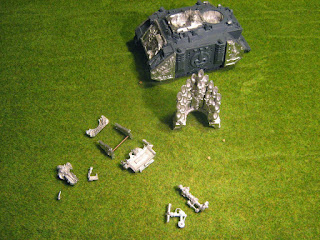 The organ console was particularly fiddly so I first pinned a brass rod onto one of the side sections and cut it down so the second section was the right distance apart and then glued the keyboard and secured the assembly with green stuff under the keyboard.  This assembly was then glued to the front cockpit before gluing the ornate front on. 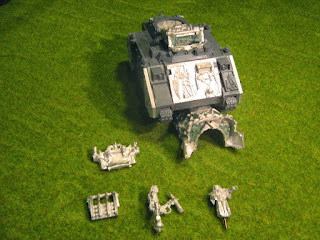 I decorated the rear ramp/door with the fleur-de-lys cover intended for the rear hatch of the rhino.  The stubs on the underside had to be cut off and sanded down before it could be glued to the ramp. 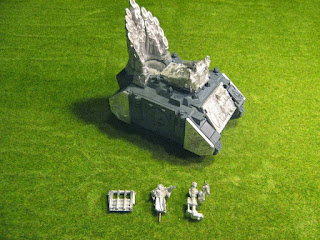 Well  it could have been better aligned and have fewer gaps but it is not going to fall apart!

Posted by inquisitor darius at 22:56 No comments: